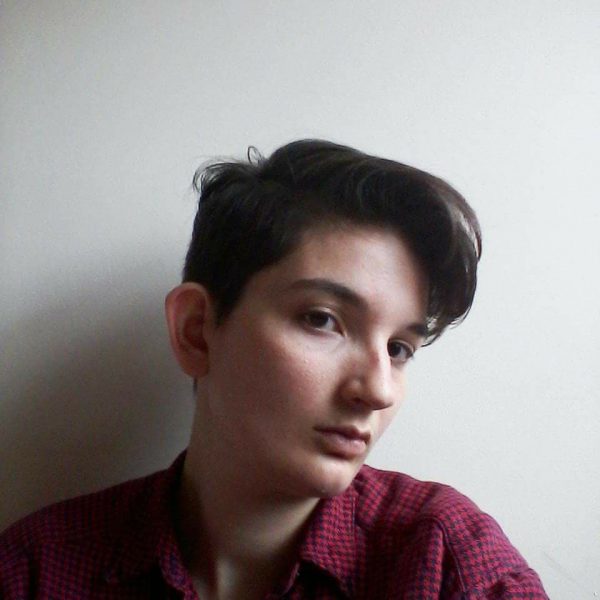 Bryony Bates’ work has been described as “angry sex poetry” – with some tongue in cheek, admittedly, though she says as taglines go it’s accurate enough. She’s a poet and writer living in Manchester, and a long time friend and some time collaborator of Generic Greeting. In a side room at the Central Library, she met with Joey Frances to talk poetry.

“The themes I seem to come back to all the time are sexuality, and power, and gender, and how those things interact. The form that my poetry takes is on the experimental side – I’m interested in pushing at what language can do and not just writing ‘a nice poem’. I’m not interested in it having a meaning that you unlock.”

She moved to Manchester four years ago, and began writing poetry in earnest around the same time. Her early readings came off the back of involvement with Young Enigma, an LGBT writing group, and she was writer in residence at Manchester Central Library’s Archives+ in 2014. More recently, following the development of her own work more strongly toward the stranger side of poetry, she has read at experimental poetry events such as Peter Barlow’s Cigarette and the Other Room, as well as events in Liverpool and Leeds.

“I’ve found the poetry scene here really interesting, and very welcoming, and certainly very challenging. I think one of the key things about Manchester if you are an artist of any sort is that it’s a very collaborative environment, and at the very least supportive. There’s certainly this idea that everyone wants to do things together – and with the poetry scene in general in the North West.”

“I would say there is a coherent queer poetry scene here. As a way to develop myself as a writer in a scene, that was very open. Whereas now, I think seeing more things that are similar to mine challenges me to try different things.”

“I don’t think I’d be as good a writer as I am if I hadn’t moved here. In terms of the amount of work I’ve produced, and the way I’m now going in a different direction – all of those things, a lot of that comes from being here.”

Bryony’s latest publication is a pamphlet called States, which came out last year on Enjoy Your Homes, a Sheffield-based small press who publish experimental poetry and sounds. Reviewing the pamphlet for Zarf magazine, Gloria Dawson called it “considered, dense and meaningful” and said “sometimes reading it feels like playing a game, or working out a puzzle. Other times it feels like bleakly hard work.” 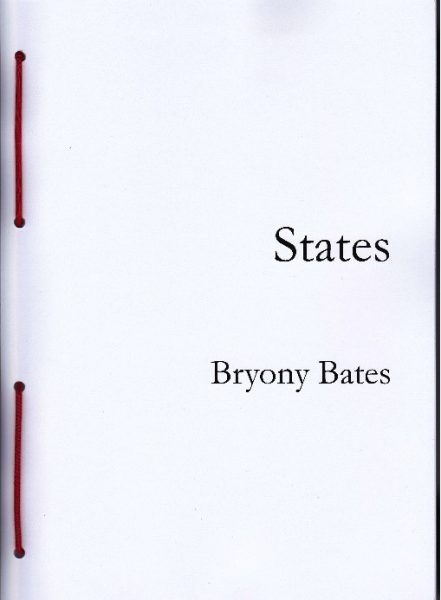 Bryony describes the work: “It’s a sequence of four poems. They’re all called ‘State number 1, 2, 3, 4’, and that’s referring to state of mind. These are all poems where I’ve used the same technique, which started out with one thing where I’d written a stream of consciousness type thing because I was bored at work one day. So I was writing down what I was thinking about, which at the time was that I was growing my hair out, so I had long hair for the first time since I was a teenager, and I’d noticed how I’d been treated differently by people because of it. What I ended up doing with that bit of text was, I reformatted it into four columns, printed it out and then cut across the lines, and made the poem out of those lines. So what you get is fragmented thoughts. If you tried really hard you could rearrange some of it into more coherent things, but as is it’s almost like clouds of words, and the way they’re arranged on the page and where the gaps are is all influenced by that.”

“So I’ve done three more – they all happened to end up on similar themes about gender, perception of gender and sexuality, specifically in relation to me. I didn’t want to write something strictly autobiographical, but it certainly comes out of me and my thoughts about myself.”

The pamphlet itself is an interesting object, taking an unconventional form to match the needs of its poems. Each poem is spread across loose A4 sheets of card – sometimes in portrait and sometimes in landscape – bound together with red cord, and held in a cellophane wrapper.

A common interest which runs through much of Bryony’s work is to do with finding strangeness in recontextualising bits of language, as a way to explore the habitual thought or social content embedded or unnoticed in our everyday speech.

“I use a lot of cut up techniques, and that’s partly because I’m very interested in speech and speech patterns, overheard things and snippets of conversations, and how they sound different if you contextualise them differently. I spend quite a lot of time transcribing things. Some of the stuff that seems really disjointed, or strange, in the context of a poem is actually just putting down what someone said exactly.”

Beginning from this ear for spoken weirdness, and from instinctual curiosity, this interest takes on a social or political aspect, exploring “the assumptions you make about things that are overheard”, how the stories we spin about strangers might reflect our social values – or patterns of repetition, “where you notice something and then you keep noticing it,” which perpetuate or represent those values. In the context of a subject matter which often relates to gender, sexuality, and power, this might transform into a question like – what are the dynamics that are reinforced in the ways we talk about our own sex lives, or gossip about the sex lives of others?

So for example, one recent poem – entitled, fittingly ‘When these words were first published in their original context, those who said them had not come out as gay’ – is built up of quotations from celebrities who’ve been rumoured to be gay (some of them later came out, some are straight, others may be closeted or keeping their sexuality private). The themes being explored are around the pressures of constructed narratives around celebrities’ lives, the process of ‘coming out’, public spotlights and rights to privacy. But the poem itself works through a process of “accumulation”, of finding similar phrases, recurring kinds of avoidant response – “I like to keep my personal life personal” – and seeing what these patterns produce as we notice and read them.

I don’t think there’s anything wrong with being gay

(Extract from ‘When these words were first published…’)

“People get embarrassed talking about it, they say ‘you talk about this all the time, you’re obsessed.’”

But, Bryony says, not only is sex and sexuality a valid topic in itself, but she’s very interested in looking at these issues as an area where power dynamics which are prevalent throughout all our social relationships reproduce themselves in particular ways.

“The amount of push back I’ve had from straight people when I suggest that there’s an inherent imbalance of power in a relationship between a man and a woman – ‘cos they don’t want to think about that, even if they’re feminists, in relation to their own relationships. Whereas if you talk to a group of bisexual people – and I’ve had this conversation a few times, and I find this for myself – what they’ll often say is that being with someone of a different gender is easier socially but harder on an interpersonal level, and it’s much easier to date people of your own gender.”

This drawing on lived experience of hidden or relatively unconfronted power dynamics is another raw material for much of Bryony’s poetry, alongside the interest in found text and speech. Certain areas lend themselves more to this kind of investigation than others:

This is to do with a sense that those encounters are more strongly caught up in those social problematics which Bryony’s work is interested in, and can be more easily explored on those terms without sliding into simple autobiography.

it seemed you still wanted to pass comment and I still found myself outside myself,

(Extract from ‘A Waking History of Skin’)

In performance, the question of what it means to talk about these things is pressed directly onto the audience in the sometimes awkward or uncomfortable experience of hearing these poems in a public setting – often evoking smatterings of nervous laughter. Bryony actively heightens this effect with her performance style, amplifying the challenge the poems pose to their listeners by taking on elements of an authoritative poetic voice which is more traditionally masculine.

“I think something which comes through really strongly in my work, and particularly when I do readings because of the way I present myself in readings, is this sort of very detached or formal or sardonic tone.”

“Something I used to think about very actively, and I don’t any more but it’s still there – is how I can have an authoritative voice, as a woman.”

“The bit in ‘Complicity Is Your Main Weapon’ which is really key and has worked when I’ve read it, is asking the audience ‘who do you imagine yourself as in this situation’. I want to demand something of the audience, to say ‘you can’t sit outside this’. I think that’s certainly a big part of the performance. I want that nervous laughter, that’s something I find really satisfying because that means someone’s suddenly gone ‘uuuuhh’ and is really thinking about it, and I certainly think adopting quite a severe persona helps with that because if people are a little bit intimidated and a little bit scared then that’s going to make them more nervous and that’s what I want.”

Bryony is currently working on her first full collection, which is to be titled Stella, I’m Bleeding. As well as poetry, she has written a play, She Said/She Said, which she hopes to get staged later in the year.

She is also a member of Contact Young Company. They’re in the process of devising and rehearsing for She Bangs the Drums, which will be her third performance with them. The play is a collaboration with Sh!t Theatre, commemorating 100 years since the Representation of the People Act, which first granted some women the vote, and exploring the political struggles which led up to it. You can see it at the Museum of Science and Industry from 8th until 11th March, as part of the Wonder Women Festival.

“It’s been really interesting to go through the process with a group of people with very different levels of awareness about feminism, gender(ed) politics and radical political action. I’m honestly so happy I get to finish my time with CYC with this production.”

If you want to see more of Bryony’s work, you can watch videos of her collaboration with Gareth Twose at last year’s North by North West poetry tour event, reading at Manchester’s The Other Room poetry night, or reading extracts from a collaborative piece written with Joey Frances, also at The Other Room.

Poems are in print in the Other Room anthology and Sure Hope #1. You can buy her self-published pamphlet, ‘Diversion’, by contacting her. She’s on twitter @Bryony_Bates.